The weather forecast prior to our start was somewhat less than ideal, but with a support crew in place we thought we would give it a crack and see how far we got.  The plan was for Rick Jenner and myself to run the whole route with various others runners supporting and navigating each section and of course supporting us on the road crossings.  Rick and I had attempted the BGR last year, we had opted then for a 7pm start which had meant we were up on the Helvellyn range overnight.  Unfortunately we had to pull-out part-way through Section 2 as we were slowing down quite a lot due to poor visibility and also getting quite cold because of the heavy wind/rain.

So, a year later and we were back again, better prepared and with a much more organised and experienced support team.  This time we opted for a midnight start so as the overnight section was done early and the rest of the round would be in the light (apart from the last bit on the road back to Keswick).

On Midnight Friday 3rd July 2015, along with about four other BGR groups, we were stood at the door of Moot Hall in Keswick about to start.  We were accompanied for this section by experienced Ultra Runner Janson Heath and his friend Chris Swanepoel. It was a nice sociable start to what turned out to be a very long day in the hills, as all the groups ran out of Keswick together and started to head up towards Skiddaw.  It was a strange sight seeing so many head torches descending off Skiddaw as we all made our way towards Great Calva.  From here the groups all started to split up and take different routes towards Blencathra.  From this point on we were pretty much on our own.  The descent off of Blencathra down the ‘Parachute’ route and then across onto Halls Fell was a very quick descent and quite interesting doing in darkness.  Section 1 was done as we met some of our friends at the Threlkeld Cricket Club.  A bit of food/drink, change of socks, and we were ready to head off for Section 2.

Chris left us at this point and now it was just myself, Janson and Rick.  This is when things started to get interesting! It was getting light as we climbed up towards Clough Head, but at the same time the weather started to turn.  The rain started and as we ascended the wind speed got greater and greater. As we progressed along the ridge line towards Helvelyn the conditions got worse and worse.  The rain was torrential at one point, causing localised flooding/rivers, and combined with the strong winds made it rather uncomfortable up on top.  To add to this the Thunder and Lightning, which seemed a bit too close for comfort, started as we were near the Helvellyn summit.  Rick decided to abandon his BGR attempt at this point and dropped straight back down towards Dunmail.  Janson and I carried on and finished the rest of the Section 2 peaks.  I was greeted by our road support at Dunmail with hot porridge and new clothes which was very welcome at that point.

I left Dunmail with Steve Coates navigating and Alex Smith & Mike Vinegrad supporting.  This was a tough tough section for me.  There were many points throughout this I thought I wouldn’t be able to complete this section let alone the whole round.  Although it had stopped raining at this point, above about 500m we were back in the clag again and very reduced visibility.  Steve did an absolute sterling job with the nav in tough conditions.  Mentally I was finding it very hard to continue and we were losing time on our schedule at every peak.  Kevin Easley met us at Scafell Pike and took over the nav to lead us up Lords Rake to Scafell and down into Wasdale.  We were about an hour down on our 23 hour schedule at this point, but I had perked up a bit and was still feeling strong, the weather had started to improve so we were confident of clawing this back on the final two sections.

Kevin continued with the nav for me on Section 4 and we were also joined by two fresh support runners Ian and Rowan. The weather had really started to improve now and the promised afternoon sunshine breaking through the clouds.  We gained about 5mins of time on the climb up to Yewbarrow and the rest of Section 4 was pretty straightforward and actually quite enjoyable in the improving weather.  The wind was still quite strong but the sun was out which really helped with the moral. The downhills were starting to hurt now and the descent towards Honister was quite painful.  As I approached the car park Rick rand back towards me with some coke to drink.  We really had very little time now, I was about 55 minutes down on the schedule so there was very little stopping at Honister.  A change of socks and a banana and I was sent on my way.

I ran out of Honister with Alex who was going to nav this section for me.  Ian and Rowan sorted out the kit and then caught us up on the ascent towards Dalehead.  We knew that potentially the sub-24 hour target was going to be close, but I was feeling strong at this point and Alex did a great job of pushing the pace hard and at each of the three remaining peaks we gained big chucks of time back.  The descent from Robinson was painful but at this point I was confident of a sub-24 finish.  We were met by Rick and Janson and High Snab Bank, a quick change into road shoes and it was the final push back along the road to Keswick.  I was running surprisingly well at this point and it was great to have Alex pushing the pace still on the road.

Rick joined us just outside of Keswick and it was a great feeling running into Keswick and toughing the Moot Hall door 23 hours and 18 minutes after we had left it.  I wasn’t really sure what food/drink I would be able to stomach at this point so we just had a few celebratory chips before heading off to bed.  What an amazing experience the BGR was.  There were some emotional ups and downs as I battled the metal highs and lows and on the fells.  The support team was amazing and there is absolutely no way I could have done it without them.  Thanks must also go to the FRA Forum for useful snippets of advice and also to Bob Wightman for all the BGR resources on his website.  A great day in the hills with great friends. 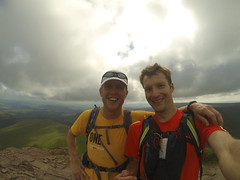