On Saturday 12th February Tom Williams (from the Marathon Talk Podcast) and I did the Yorkshire Three Peaks, and if that wasn't hard enough we also did 120 press-ups on our way round!

I stayed with Tom & Hels on the Friday night in Leeds before an early start on the Saturday morning to head up into the cold and misty Yorkshire Dales. We were soon in Horton-in-Ribblesdale and heading up towards the first peak: Pen-y-Ghent. As we approached the top; the temperature started to drop and the wind picked up in preparation for our first set of 40 press-ups, along with some very strange looks from a group of walkers.

Tom is currently training for the Comrades Ultra Marathon at the end of May, and along with Martin Yelling, they have set themselves the challenge of doing 100 press-ups at 30km, 60km & 90km. So when Tom mentioned he was going to do 40 press-ups on the top of each of the Yorkshire Three Peaks I couldn't be out done and had to join in.

We were soon enjoying the fast-paced running as we descended the flanks of Pen-y-Gehnt and headed along the flat(ish?) section to the Ribblehead viaduct. From Ribblehead the Race Route cuts under the railway line and heads straight up Whernside. However, as this is not a public footpath we opted for the slightly longer route around the back of Whernside. The steep climb up Whernside and another 40 press-ups.

The steep technical descent off Whernside is fairly slow going and then it is down to the Hill Inn and the start of the long climb up Ingleborough. The final Peak of the day starts of quite easy with a nice run along the limestone pavings and board-walk, and then it is a short sharp climb up the exposed rocky edge to reach the summit plateau. A struggled run along the summit to reach the final trig-point. The last set of 40 press-ups started OK but soon deteriorated into a mental and physical struggle. The final Ten required every last bit of effort (and encouragement from Tom) and even then I only just made it.

The run off the top of Ingleborough summed up a great day as the sun came out and we were blessed with great views over the Yorkshire Dales. It was then back into Horton, and the Pen-Y-Ghent Cafe, for some much earned food & drink.

All together we were out for 5 hours and 40 mins and covered just over 25 miles and 120 press-ups.

Sunday, I went for a 10-mile recovery run with Hels around the Leeds Half-Marathon route.

Thanks guys for a great weekend. 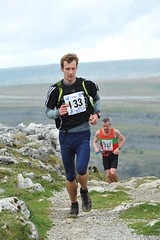 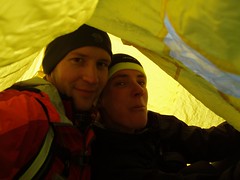