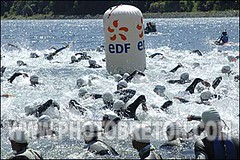 Pre-Race
The morning of the event I headed up to Alpe D'Huez village (by car) to arrange all my stuff in the Transition 2 area. Because the event finished at the top of the mountain I followed everyone else to descend by bike down the mountain to the start area and Transition 1. Here we all racked up our bikes and got ready for the race. The English Contingent (about 23 of us) were all in Transition area together so that gave us a good chance to talk about the race. It was also nice speaking to some of our professional triathletes who were competing in the event. The start time soon approached and people started to pull on their wetsuits. It was nice to get to the cool waters of Lac Du Verney as the sun was still very strong.

Openwater Swim 1400m - Lac Du Verney, Vaujany
My first openwater swimming event. As the masses set-off I was surprised by the forward surge of water as everyone started moving forwards. Once I had got myself started I was really enjoying it and the water was so incredibly clear. Obviously there was quite a lot of bashing into other swimmers, this reduced when the field started to spread out. Overall the swim turned out to be the best out of the three disciplines and I finished the 1.4km swim in 23min 40sec in a place of 187th.

Transition 1 (Swim > Bike)
On exiting the water I had the initial dizziness feeling due to going from swimming to vertical and then trying to run. However that soon passed and after a gentle jog I soon arrived at my bike. Here I stripped off my wetsuit and put it into the plastic bag the organisers had supplied so as they could transport it to the top of the mountain for us. I then put on my cycling shoes and ran with my bike out of the transition area. 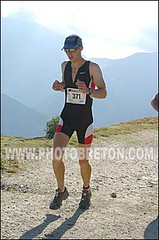 The start of the bike was a short uphill section to get up and away from the lake. The traverse around the lake was to start with fairly flat, I stayed on my aerobars and felt really good after having a rewarding swim. The first of the hills started as we climbed away from the lake and I kept good speed here without pushing too hard as I knew what was ahead. We then descended back to the lake and after a few more climbs eventually made our way out to Bourg D'Osians and the Start of the famed Alpe D'Huez Climb. The police had stopped the traffic in certain places and it was a nice, fast approach, with beautiful weather and scenery, to the bottom of the Alpe.

We turned onto the Alpe D'Huez road, crossed the river, turned a corner, and then the shock hit of just how steep this mountain was. It wasn't long before I was dropping into my lowest gear knowing that I had 1,090m of ascent to get to the top. The climb continued at a hard gradient but it was a magical experience with all the Tour De France writing on the road and the names of the Tour winners at each hairpin.

The drink stops were very welcomed and after lots of suffering and 21 hairpins later I reached the top.

Transition 2
This went very well and I passed through the transition area very quickly. I put on my running shoes picked up a few energy gels and then headed off for the run.

9km Run - Alpe D'Huez Village
As I was expecting the run after such a hard cycle was difficult to get into. Being at altitude also didn't help but to start with the going was very slow as we headed away from the Alpe D'Huez village on a rough track. Fortunately there were lots of food and drink stations which were very welcomed. After a few kilometres my legs got used to running and the rest of the run was hard but bearable. I finished the 9km run 392nd in a time of 56mins 46 seconds.

Conclusion
On completion of the event my main aim was to eat as much food at the finish line as possible. The majority of my time was lost on the Alpe D'Huez climb and although it is impossible to train on anything similar to that in the UK I think more cycling hill training is definitely necessary. Overall I was pleased with the event and glad I entered. It was very well organised. 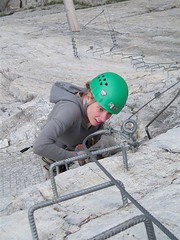