Since 1965, when the sump was first discovered, there have been numerous attempts, over almost 4 decades, to pass it. This report details our current approach in the hope of passing this most stubborn of Mendip sumps.

History of Exploration at Sump 12

On the 20th March 1965 sump 12 was reached by Dave Savage, Mike Wooding and Dave Drew making it the deepest cave in the country[1]. From that historical trip to the present day there have been over 94 recorded[2] trips to sump 12, not to mention the unrecorded trips. Of these trips, 41 have been for purposes of exploration, in or around sump 12, with 51 different divers trying to find a route through.

On a lonely solo trip in May 2002, Phill Short (WCC/CDG) discovered a new way on in sump 12. During previous attempts, the 'squeeze' was passed, and as is the natural thing to do, the divers have headed straight up into a narrowing rift. Like others Phill had explored sump 12 on numerous occasions in the past. However, on this particular dive, a 'way on' was found. After negotiating the 'squeeze', instead of heading up into the impenetrable rift, a corkscrew round to the left leads to a body sized tube, at the same depth as the squeeze (6m). On this first trip, approximately 10m of line was laid along the new passage before a return to base was made. Upon exit, the gravel bank behind the squeeze promptly collapsed onto Phill's head and body. In the attempt to get out of this temporary burial and back through the squeeze, the mouthpiece, which he had been breathing from, was ripped from the cylinder, emptying the contents into the sump. Still buried, Phill was struggling against time to reach the second mouthpiece and exit the sump. Somehow he managed, and as he lay in the sump pool wondering how he was going to get home from this remote location with just a partially full cylinder, he realised he had no choice but to go back into the squeeze to retrieve the helmet and light that had been ripped off in his attempt to escape. With this disastrous trip behind him, Phill decided that the continuing exploration work would be a lot less nerve wracking with a little help from his friends.

Andy Stewart (DSS/CDG) and I soon found ourselves involved in this project, and it was decided that to enable safe progress in the sump the squeeze would need enlarging to make it easier to pass and work on the other side. Through various Mendip sources, a quantity of underwater detonators and explosives were acquired. These were inserted into a fissure in the roof of the squeeze and detonated. The resulting fumes prompted a quick retreat to the surface.

The following weekend we carried a selection of digging drums, bags, tools, pulleys and ropes down to the sump to excavate the roof of the squeeze. The explosives had taken a fair chunk out of it. With everything in place we carried two 6Litre cylinders each down to the sump for one of many attempts to clear the gravel and rocks. An efficient hauling system using ropes, pulleys and underwater signals meant we were able to quarter fill a one ton 'builder's merchants' gravel bag with each 40-45 minute dive.

A trip in late February boosted our enthusiasm when unusually clear water in the cave meant the first diver into sump 12 had about 5m of visibility! The squeeze was passed fairly easily as it is now no longer a squeeze and the 'new passage' at 6m depth was clearly seen. A loose boulder pile is now the only thing preventing us from entering this unexplored passage. Volunteers are welcome to offer assistance.

[2] Information for the history of Sump 12 was taken from the Cave Diving Group Newsletters. 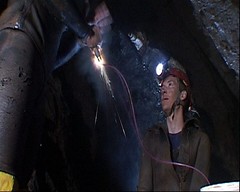