Overview
We got an overnight ferry from Dover to Calais and then drove through the night to the Italian Dolomites. Here the Via Ferratas were usually in the high mountains and served as a purpose to get you as far into the high mountains as possible. After a week here we travelled over to France where the Via Ferratas were still fairly hard but in much more urban areas. They were there more for fun than for purpose.

After a fairly long walk to the Rifuge Pradidali Mountain Hut we eventually gained the start of the via ferratta at the end of a small snowfield. After the main vertical section the cable stops and you are left to scramble up a very loose, dirty, gulley where at the top there is a very short section of cable which brings you over the top to the end of the route. It is then a scramble down the other side of the mountain and a descent of the Via Ferrata De La Vecchia.

The Guidebook recommends you use the Gondala from San Martino Di Castrozza to Colverde. That was too much like a lazy/easy option for us so we walked. At about 2100m we reached the base of a huge cliff and this is where the scrambling started. The start of the via ferrata was at 2580m and from there the rock got steeper as we headed up towards Cima della Vezzana at 3192m. The descent route was just as entertaining with steep bands of loose rock and snow.

29-Jul-06: Lake Garda Area
We attempted to do the Via Ferrata Del Centenario SAT (Via Dell'Amicizia) but it was closed. So I went for a pre-triathlon swim in Lake Garda. This was a lot colder than I was expecting but it was a hot day and the water was very clear.

Starting from the village of Mori a short walk reaches a picnic area which at the back of is the Via Ferrata. This was an excellent route, well protected, very strenuous but unfortunately quite polished rock.

Although this Via Ferrata was quite fun and it had some very impressive bridges across the Durance Gorge it was very commercialised. We had to pay to use the Via Ferrata and it was also packed of very slow moving groups.

A short via ferrata that traversed the gorge below the Lac Sautet Dam.

This route starts just on the outskirts of Borge a Valloire and to start with is very strenuous with lots of overhanging ladders and wire bridges. We were unfortunate to meet a bunch of Army Cadets who really couldn't climb and it meant we were hanging around for ages.

Apparently the most difficult Via Ferrata in France. It starts in the middle of some apartment blocks near Val d'Isere and to start with is fairly easy. However once you get to the big bridge the walls become very steep/overhanging and the route is very strenuous. All together it was very long and hard route and one of the finest Via Ferrata's on the trip.

Albeit fairly easy yet very impressive. It traversed up the side of a huge waterfall, which is fed by the River Gliere, with an exiting 2-strand wire bridge at the top. We spent a lot of time playing around on the different routes and trying to take photos.

An Excellent Two Weeks of Via Ferrata's in the Italian Dolomites & French Alps. 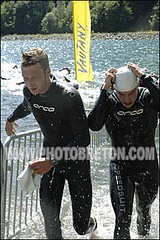