After joining the CDG Foot and Mouth on Mendip prevented any diving training taking place so weekends were spent cave diving at Dan-Yr-Ogof and other sites still open in Wales. It was then that Martin Groves (SWCC) was planning a trip to the Dordogne region of France. When asked I immediately said yes to the chance of going cave diving in one of the worlds best regions for such a sport. All I had to do now was beg and borrow as much equipment as people would let me have but most importantly obtain some vague diving skills. Thanks must go to Sean Parker (BEC/CDG) for helping me out on both these very important points.

The few weekends left before we departed for France were spent with Martin and Krysia at open water sites across the country, namely Stoney Cove, practicing with bigger cylinders and buoyancy control.

The date soon arrived and we were soon heading off to France in a car rather overloaded with diving kit. The journey went smoothly and we eventually arrived to excellent weather, which was to continue for the rest of the week.

The first days diving was at the Trou Madame, which didn't quite go as planned, as like most of the things I do. High water levels meant the lakes/airbells between the sumps had flooded. If only I had known this before I started the dive. 800m of diving later I still hadn't surfaced and had reached thirds on both cylinders so decided to turn back. After a 71 minute dive Martin was very relieved to see my exhaust bubbles as I exited the cave. By far the longest dive I had ever done but at least I was in excellent surroundings.

A more gentle day was had the day after. The fontaine du truffe was embarked upon and excellent visibility was had. Martin and I dived to the end of sump 3 after noticing a pressurized airbell at -6m depth. After a relaxing tourist dive in the truffe it was clear this wasn't going to last for long and the next day we had an adventurous day in a rather intimidating place, the Emergence Du Ressel. We dived here with 2 x 15Ltr and 1 x 12Ltr cylinders. We dropped the 12Ltr stage tank at the start of the loop (150m from base) and continued to the top of the outstanding 50m shaft with twin 15's. We then completed the loop by going out on the shallow route, I was just hitting 1/3s on the 15's as I reached my stage tank!!! Martin indicated we should look for the airbell, off the deep route, but I was not convinced as I was becoming over powered by the size of this place (boulders similar to the Time Machine in Darren) so we headed out rather relieved to see daylight and air. Later that week we returned, laid a line off the main route and located the airbell.

Other dives included a 600m dive at -20m in the Source de Landenouse, after kitting up in the water in the bottom of a well 10m down. We also had to squeeze in some caving while here, unfortunately the Goufrre L'oule was chosen. The 1Km walk down the side of the valley with diving kit proved extremely hardwork. After so many hours of caving / diving we then had the task of walking back up the valley with cylinders, wetsuits, caving kit, SRT and Rigging kit, bolting kit as well as all the other bits of diving stuff needed. Once back at the car we were very dehydrated and tired.

An excellent week was had overall, with lots of new skills learnt and experienced gained. A bit of a jump from using single sets down Swildon's as was the case a couple of months ago.


Caving between sumps 2 & 3 very difficult with twin 12's and a drysuit. A return is planned with wetsuits.


Returned with wetsuits. The carry between 2 & 3 was a lot easier. The carry between 3 & 4 was extremely hard work. We started of climbing with twin 15's but at the low bit decided this was not sensible and did several trips to sump 4 instead. Got to end of sump 4 and returned due to light failures.


Excellent Dive 600m in total at 22m depth. Good fun kitting up in the water at the bottom of a well.


Extremely hard carry with all diving kit, caving kit, bolting and rigging kit down the side of the valley (over 1km) and even harder in the sun on the way back up the steep sided valley. At the pitch (30') we put in some bolts and headed into the cave with all the kit. We reached a climb which we went up and after some squeezing found a really out of the ordinary calcite funnel. After discovering this was the wrong route we went back to the climb and went down another climb, which went straight down to the sump. We then went to get the diving kit and portered it the rest of the way down to the sump. MG dived into the muddy sump pool and returned after discovering the line was broken. A return was made to try and repair the line but no luck was had. We exited the cave and had to walk back up the valley.


First dive of holiday, Water levels were high so didnt manage to surface. Hit thirds at 800m in. Excellent dive. Very glad to be out. I dived with MG&KL for 1st 100m before continuing on my own, they dived to about 300m. The aim of the trip was to go caving beyond Sump 5 but this was never achieved due to water levels.


Hit Thirds towards end of sump3. Definetly need wetsuits between sumps. A return is planned. Had stage tanks through entrance but dropped them off in sump1 and didnt use them.


Dived to start of loop where we dropped 12Ltr stage tank. Continued on deep route to top of 50m shaft. Then headed back out shallow route. Hit thirds as we hit stage tanks. Martin had ideas of looking for airbell but I was quite intimidated by the size of the place and wanted to get out.


Diving in sumps 1,2&3 was nice and pleasant with good viz but when we eventually got the kit to sump 4 the viz was not very good and the line was crap. We turned round at the end of sump 4 because of deterioating viz and light failures.


Kitted up in water with martin lowering all the kit down to me. We then used the hauling line as a dive line to dive into the cave before connecting with the main line. Massive passage. Lots of particles in water creating bad viz. Lots of fish and leeches. Fixed ladder at entrance is unsafe.


We located the airbell about 75m beyond the junction. I then laid 5mm blue polyprop from the main line vertically upwards into the airbell. Martin tidied up the other line that was broken in a few places. Blue CDG line looks out of place in the ressel. Excellent dive for last day of holiday. 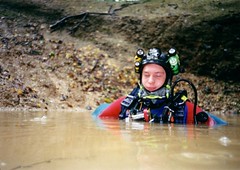