Our aims for this trip were to: Radio locate Sandwich Chamber, Blow up Sump 12 boulder pile and to film it all in the process. Needless to say our first problem was getting the vast amounts of radio, filming and lighting kit to Sandwich Chamber - the furthest point of Swildons. I got the short straw again of re-climbing Victoria Aven to put the rope up for everyone. Once at Sandwich Chamber the radio location worked extremely efficiently and we made voice contact almost immediately. We then just had to wait for about an hour while the team on the surface did their accurate location. While waiting we attempted to have a hot drink but the lack of a lighter was not helping. We tried shorting out one of the radio batteries with a bit of bang wire to create a spark but this did not work. We later ascertained that while diving through sump 9 the gas cylinder had patially filled with water so we had no chance of lighting it anyway.After the radio location was sucesfully complete we headed back to the streamway with all kit. More filming was done en-route. Now the exiting bit. To blow up sump 12 while attempting to film it. Phill laid the charge in the sump Gavin sat on the sand bank by the side of the pool with his camera. The explosion was emmense and a huge shower of water jumped out the sump followed by a cloud of fumes. With all our aims complete it was now just a case of getting ourselves along with all our kit back to the surface. Later in the week Phil Hendy and Brian Prewer calculated the depth to Sandwich chamber to be 43.3 but this was later re-calculated to be 77m. The exact location of Sandwich chamber on the surface is written in the Wessex logbook. 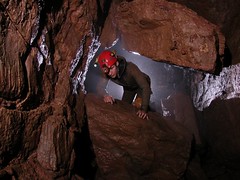