The birthday of Pete McNab Snr (Snab) inspired a trip to Northern Spain at Easter of 2002, organised by Pete McNab Jnr (Snablet). The main aim was to make the descent through from Sima Cueto to Sistema Coventosa, which at 800m was previously the longest through trip going.

Snab and Anita, Snablet and Annette, Vince Simmonds, Pete Bolt, Paul and Brendan Mackrill (based in France), Greg Brock, Mike Alderton, Tim Lamberton, and Bea Goford all stayed at a campsite in Matienzo where a full scale expedition takes place at Easter-time each year. From the moment we stepped off the plane on the weekend of the 23rd March 2002, until we returned to Britain the following weekend, the sun shone, and the sky was clear. The nights were crisp, while the mornings saw the campsite draped with mist.

Caving began on the 24th March, with a trip to rig the bottom end of Sistema Coventosa. This involved rigging a short pitch very near the entrance for ascent at the end of the through trip, and generally getting to grips with the bottom end of the system. The navigation was fairly uncomplicated, and we reached the lakes without too much trouble. The lake section is a series of three lakes, the first roughly 50m long, the second roughly 100m, and the last (and longest) at 150m. We had previously decided to use wetsuits and inflatables in crossing the lakes on the through trip, and so Mike and Greg swam them across and left them at the other end.

The next day saw a late morning visit to the top entrance, walking up the hill from Arredondo in the boiling heat to deliver the 200m rope for the first pitch. Paul and Brendan, Tim and Mike made the smaller trip through from Sima Tonio to Sistema Canuella, The final descent of which drops over an inconspicuous ledge into a yawning black space. This is the second largest chamber in Spain, and the abseil is suitably impressive. The vertical element of the cave is, apart from that final abseil, fairly enclosed, with relatively small pitches. The bottom section is beautiful, with huge passage and fantastic sword-like formations. These are shaped like blades because of the strength of the draughts whipping through the cave, and are several metres long, dropping from the high roof of the passage to head-height in some places. Navigation through the bottom section was made easy by reflective markers to point you in the right direction.

On the 26th, Snablet, Annette, Vince, Pete, Greg, and Bea went through Sima Tonio to Sistema Canuella, while Mike, Tim, Paul and Brendan went through Sima Cueto to Sistema Coventoza. Their trip lasted 18 hrs, and a traditional Mendip start meant they emerged in the small hours of the morning. They were grateful for the cans of beer we had left for them at their car

The next day it was the turn of Snablet, Annette, Vince, Pete, Greg, and Bea to go through Sima Tonio to Sistema Coventoza, and we were joined by Northern hard man, and expedition cave diver (as well as a friend of Snablet and Annette); Martin Holroyd. The 800m descent is divided into 512m of entrance pitches, the first 198m of which is a single free-hang. Descending this pitch was positively awesome. 198m of rope is a lot, and unbelievably heavy to lift and feed through a stop. It is equally hard work trying to feed it all through and move downwards, although it becomes progressively easier throughout the descent until, towards the end, it is nigh on impossible to slow yourself down. The walls are elliptical, and unnervingly smooth, so that as I span slowly and involuntarily round and round, I lost all sense of place and time. The only landmarks are the chains and rings provided at 50m intervals for those who wish to make the entire descent as a series of pull-throughs, and at each of these, particularly the first, there is a feeling of incredulity. 'Was that only 50m?' The descent felt interminable, until I reached the re-bilet at 198m to find a mass of springy, tightly-curled rope, and fought with it to get onto the next part of the pitch. After that descent, the remainder of the 380m first pitch, with its several rebilets, felt like a piddly abseil worthy of a 'Sunday-with-a-hangover' trip, which is saying something when the cave is still so grand in it's proportions.

The second part of the first pitch had been rigged as conventional fixed-head pitches, but as we needed to take the rope on through the cave, Greg and Snablet brought up the rear and did it instead as a series of pull-throughs. The rest of the group continued through the pitch series until they caught up. We then split into two sections, each with a separate set of ropes. This approach meant that we were not held up by the size of our party, and luckily our ropes only snagged once on a particularly jagged pitch, when Martin managed to retrieve them. The nature of the cave changed constantly, with pitches of every shape and size imaginable. There was also a predominance of tatty bits of rope hanging from virtually every pitch head. In some places, it was possible to get these out of the way so that our pull through ropes wouldn't get tangled with them. In other places the ropes looked fairly legitimate, so we used them. Some of the 'tat' was so bad, and so clearly useless (if not dangerous), that we cut it away. This untidiness was equalled throughout the cave by literally hundreds of carbide dumps.

At the bottom of the pitch section, and well and truly committed, we tackled the 'horizontal' part of the cave. This involved km after km of massive boulder filled passage, and it was horizontal by comparison only. At the bottom of every boulder slope we descended, would be the base of another ascending boulder slope. This was both physically and mentally wearing, and so a tea and sandwiches break at 'Oasis' was more than welcome. This site is where access to clear, flowing water is easiest, and we made the most of it.

The cave continued with some more big passage. Route finding was made relatively easy; as in Sima Tonio to Sistema Canuella; by fluorescent markers at every possible junction. After the big passage came a part we dubbed the 'Mendip section'. This had a competely different character, with some fabulous round-tunnel walking passage that was exquisitely decorated with crystal roses in the walls. There was also some crawling passage- the most exciting had a wind so bracing that it could have come straight off the Yorkshire dales in winter. Also of note was a beautiful section of ascending passage called 'White Chamber', which really lived up to it's name.

The 'horizontal' section continued, with a few little pitches, to the far side of the lakes, where we paused long enough to change into our wetsuits and blow up our inflateables. The crossing of the lakes was by far the easiest part of the trip. The water was peaceful and calm, and for those of us who had brought wetsuits the cold was no problem. Vince and Pete, who had opted for the less-luggage approach, and gone without wetsuits, didn't find it too bad either.

The trip out seemed far longer than it had before. We were in the wee small hours and it definitely felt like bed-time. As I got to the top of the last pitch, I was greeted by four slumbering cavers sat in a row, and, once Greg had joined us, we made our way out. We got to the car to find two bottles of sparkling white wine and a pack of cakes, which didn't last long!

It was light by the time we got back to the campsite, and we all fell into our tents for a rest and a day off that I think we had earned by our 17 hour epic.

On the 29th March Martin dived a sump in a cave called Valline, and was accompanied by virtually the whole camp, with cavers from as far afield as Sweden, and also including Greg, Snablet, Mike, Tim, and me. The cave was, again, diverse in nature, with a completely dry upper section consisting of meandering, close walled walking sections, wide sandy bedding planes, babooning passage, and some crawls and climbs. It then dropped into a round stream passage of white-veined smooth black rock reminiscent of the lower series of Dan-yr-Ogof. The carrying was far from arduous, with so many to share the burden, and the vast number of cavers made for a real party atmosphere, and the fact that Martin had brought four huge bars of chocolate for his carriers really made the trip for me

A final caving trip saw Snab, Snablet, Greg and me visit the formations near the entrance of Sistema Coventoza. There is a series of fair-sized chambers containing unbelievable formations, some Stals standing far taller than we did. The final chamber containing less monolithic, more delicate formations, but equally spellbinding.

The whole week was memorable, with fantastic caving, good accomodation, food and drink at very reasonable prices, and a highly efficient expedition run by friendly people with a relaxed and welcoming outlook. So welcoming that Mike and Tim felt the need to stay for a second week and join their already extensive team. Mike's first trip was a cave-dive with Martin which found hundreds of metres of dry passage.

Overseas caving at its best.

Easter trip to Matienzo with the main aim of doing the Sima Cueto to Coventosa through trip.


A set up trip before the big through trip could take place. The entrance pitch was rigged and the route to the lakes learnt. Mike and I swam all the buoyancy to the other side ready for the trough trip. The following day we carried the ropes up to the top entrance.


A warm up through trip before the main coventosa trip. A lot of time was speant locating the entrance but the pitches were very spectacular with the final pitch emerging from the roof of the second biggest chamber in Spain. The big stuff at the bottom was very well decorated.


The big through trip. Over 800m of descent with 512m of that being the entrance series of pitches. The first pitch 380m was rigged with a single 200m rope to a re-belay which then had another rope with a few more re-belays to the bottom of the 380m pitch from here the pool through bit started. Snablet and I pulled down the rope below the 200m rope as this was needed on another big pitch further on. We then caught up with the others. Fortunately no ropes got caught and we all made it to the bottom of the pitches with all the ropes and fully committed to finding the way out. Rout finding was not that difficult thanks to reflective markers. A brew was had at oasis which was towards the end of the big stuff, just before the "Mendip" section. Once at the lakes wetsuits were put on and inflation devices were used to get across the three 150m long lakes. The trip had a great variety of things to do with some great formations and exposed pitches. We arrived to the surface to find a supply of beer awaiting us.


Carrying cylinders to the up and downstream sumps. There were loads of people but the streamway at the bottom was quite impressive and lots of photos were taken. 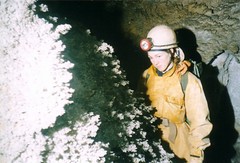