Drop 200m rope down entrance shaft for through trip which never happened due to waterlevels.


After spending the previous day trying to find the entrance which took longer than expected, so the trip yesterday was carried forward to today. Excellent series of fairly large pitches one after the other. The last of which brings you through the roof of the largest chamber in europe. A rebelay on the roof of the chamber then takes you onto the single 200m drop to the chamber floor. It is quite unnerving and certainly makes you feel dizzy doing the abseil in the middle of the chamber where you can't see any of the walls, floor or roof. All you can see is the rope spinning in front of you. Once we all eventually made it to the bottom we then had to work out where we was in this chamber and where we had to go. We hung my spare light on the SRT rope so as we could find it again after leaving and heading into the abyss of black space. After an hour of walking over boulders we got to the end of the chamber where there was some impressive mud covered formations. Time was now running out as we had to get to a new years party with the british cavers in Matienzo. The prussik out was not as bad as we had thought and it was even better that we left it rigged for the others to do tommorrow. An excellent end of year trip.


The weather was nowhere near as good as it was when we were last here but the trip was equally as good. We split into two groups: one group went up and collected the Cueto rope that was put in earlier in the week while me, Bea, Pete, Phil and Chris headed down Tonio. Most of the trip was how I remebered it however there was a lot more water in the cave. The final pitch into the impressive chamber was equally as impressive ans it had a waterfall which made life more entertaining. Bea rigged most of it. We waited in the big chamber for the other group to catch us up. We then headed out towards the Cayuela entrance as one big group. The unusual sword type formations were amaizing and fortunatelt route finding was fairly successful. Our only problem was finding the car after the trip as it was foggy and dark. We spent along time fighting through trees, along slippery banks and trying to avoid cliffs and fast flowing rivers.


Fairly relaxed trip. There was more to this cave than I had originally expected. It would be nice to do the through trip. We stopped at a point where there was some high exposed traverses that required cowstails that we didn't have. 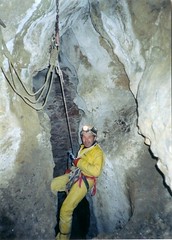