"I Cave Mostly in Somerset you know"
Tangent

Our Austrian expedition started the week before in Yorkshire where myself, Mike Alderton and John 'Tangent' Williams arrived at this small wooden hut in Braida Garth, the NCC Hut. It was here we was going to meet Snablet for the first time and sort out last minute arrangements for Austria. In the morning, after the usual large quantity of alcohol the night before we headed into Ingleton where we met Snablet in a cafe. We also bought extra expedition kit from Bernies.

The following week passed quite quickly and before I knew it I was meeting up with Snablet, Annette and Pete Whitaker (WRCPC) at Munich airport. The travelling to Halstat was amazingly simple but this was helped by the fact Annette could speak German. Once at Halstat we met up with the others who had driven out and prepared ourselves for the 3 hour walk up to the Wiesberghaus.

"G5 - It's a classic! A real fu**ing classic! not sure if I like it though"
Rich Hudson

G5 - Einsturner Hohle (Ice Gymnast Hole) was my first Austrian cave. The rock was extremely sharp, hard on gear and as the name suggests very cold. This was to be the place of three weeks worth of continuous pushing and exploration. The first couple of trips were quite easy going but soon turned into 24 hour trips, and when the camp was set up they turned into 3 day trips. It soon got to the stage where rest days were needed between trips. On one particular rest day it was decided to do a Dachstein pub crawl, but this turned out to be a bit more adventurous than planned and was summed up by Tangent once back at the Wiesberghaus.

"Now I need a rest day to recover from my rest day."
Tangent

Eventually last years limit of exploration (explanation) was reached and new cave was starting to be explored, albeit very slowly. The rift was getting harder to traverse along and in places traverse lines were rigged because of the walls being covered in a horrendously slimy mud. After pushing trips being hindered by bad weather the higher level fossil stuff was decided to be our only hope of finding a significant amount of passage.

"Only One Can Hold Me - Your our only hope."
Rob Garrett

In the remaining week before de-rigging, only one can hold me and another passage by High Flyers were looked at but neither were fully pushed. Only one can hold me was seen to continue but realistically who wants to go back and push it.

"Is there a carnival like atmosphere on the glacier"
Tangent

Apart from G5 which was where the majority of the expeditions resources and efforts were focused there were other sites to push and other things to do. The glacier, surrounding cliffs and the other mountain huts provided things to do on rest days from G5. Some excellent climbing was had not only up by the glacier but also on bolted routes by the Wiesberghaus. When resources like food and gas ran low there was always the reluctant option of walking back down to Halstat and collecting provisions.

After this years exploits in Austria I think G5 has been concluded but there is lots more to push and lots more places to prospect both on top of the mountain and down in the valley near Hirlatz (The main master system). Lets look forward to next year!!!!


My first trip into an Austrian cave (in fact my first cave outside the U.K.). The cave was unusual as the rock was extremely sharp (very hard on gear) and as the name suggests it was very cold, about 2?. There was a little bit of ice in the entrance but not enough to cause a great problem, we had prepared ourselves for lots of ice as we were the first two in for over a year (i.e. hammers and bolsters) but were relieved when then was very little. Tangent and I rigged the entrance pitch and also 'Captain Stiegels Ice Factory' pitch. Mike, Tim and Pete.W then came in with more rope and rigging gear to carry on past where we had finished and on to rig 'Action Reaction'. We the returned to the surface. Our trip wasn't yet over as we still had the two-hour walk back to the Wiesberghaus.


Another trip was now underway to rig more of the pitches. We carried over lots of tackle (ropes, carbide, tapes, tethers). We descended individually to try and avoid waiting at pitches, as the cave is so cold. We all met up at the bottom of 'Action Reaction' where we also met Snablet who had just finished taking the Austrians on a 'tourist trip'. We sorted out all the gear and with Snablet now able to show us the way we pressed on. At the end of 'Action Reaction' chamber there was a huge ice column and ice cascade, which needed a handline to get down. We were soon fighting our way down 'Sweaty Betty' with all the kit ' there was some ridiculous manoeuvring needed to get through. After rigging some more pitches we soon ran out of tackle at the beginning of 'Oi Oi Wobble Wobble Thrutch Thrutch'. On our way out we encountered a small problem at the boulder ruckle before 'Sweaty Betty', we also met up with the next team bringing in more tackle.


With lots more rope and rigging gear we descended G5 again to rig the last few pitches down to the camp. Everything went smoothly until 'Fit for Insane Worms and Gecko's' (It's a narrow rift meander with tight bends and the only possible way through is at roof level) where getting all the kit through was some what hard work. After 'Daft Invaders' Snablet and Pete started rigging 'Hall of the Mountain Numpty'. Due to the dangerous loose boulders at the head of the pitch and at other ledges on the way down lots of technical rigging, tyroleons e.t.c. was rigged. While all this happened I was left up the top with lots of the gear getting very cold. We were the first group down to the proposed campsite, this year and after confirming the suitability we carried on. Once at 'Dickheads Deathtrap' we rigged a small traverse line and abseil rope so as the extremely loose boulders you had to climb around could be avoided. The next pitch we rigged was 'Hall of the Numpty King' before heading back out. The way out was kinder probably due to the fact we had less kit. Just before 'Captain Stiegels Ice Factory' there was a small boulder collapse but it didn't cause any problems and we were soon on the surface. Overall a very tiring trip probably due to the lack of food and sleep.


Another trip through the night to rig the last couple of pitches into the streamway to last years previous limit of exploration. We had planned to go in the previous day but large amounts of water delayed the trip. As always 'Fit for Insane Worms and Geckos' was a nightmare with large amounts of stuff. When we eventually arrived at the camp we had food and drinks with the camping group (Mike, Rob, Pete, Chris). After this we went on to rig 'High Flyers' (the best pitch so far). Once in the streamway we followed it downstream and rigged traverse lines and handlines because of the dangerous nature of the high level route. The rock is very sharp and hard (a nightmare to hand drill spits) and in places covered in mud and loose rock. It is also amazingly warmer in the streamway compared to the rest of the cave ' 4? as opposed to 2?. When the camping team reached us we left them the ropes and started making our way out. They continued surveying what we had found and rigging further into the cave while surveying. Back at the campsite where Snablet and Pete had now engineered an excellent campsite we had food and got ready for our exit. We eventually left leaving Snablet and Pete to sleep. 'Fit for Insane Worms and Geckos' was no easier on the way out (Tim.L: 'No it's a bloody sight harder') but we had hot soup on the other side. The rest of the cave was hardwork and 'Action Reaction' being rather aquatic didn't help this. We were soon on the surface walking back in the light of the sunrise.


(8Hours Sleep) Yet another trip into G5 to try and push the system deeper. I went as far as the campsite with Tangent who had previously not been through the dreaded 'Fit for Insane Worms and Geckos'. It was even more amusing going through this time with camping gear as well. Once through and down 'Daft Invaders' we had a look at the old unexplored phreatic above 'Only one can hold me' but the climb up to it needed bolting due to the walls being extremely loose and muddy and also the 'Only one can hold me' pitch underneath. After that we carried on down to meet up with Rich and Paul at the campsite. At the camp Joel and Tim were still in bed so Tangent and Rich occupied the other two beds while Paul and I went on further into the cave. The 'Birth Canal' was hardwork and navigation difficult, which made progress quite slow. It was nice when it opened out into a 50m pitch (recently explored by Joel and Tim). Once at the bottom of this magnificent pitch (at present unnamed) we picked up the drill, ropes and rigging gear and along with the kit we had carried in descended another pitch and pushed the unexplored passage. Thos was similar in nature to the 'Birth Canal' (high rifts with a stream and very muddy loose walls) hence progress was very slow. We rigged a few more drops and put in some traverse lines but was soon to tired to continue. Back at the campsite after struggling back out the 'Birth Canal' we cooked some food and kicked Joel and Tim out of bed so we could have some well deserved sleep. Joel and Tim got up, cooked breakfast and made there way back to the surface while Tangent and Rich got up and prepared themselves to go pushing at the bottom of the cave. After a very nice (albeit short) sleep we were woken by Tangent and Rich returning from there pushing trip. They got some food and went to bed. Unfortunately Chris and Pete.W were now on their way to the campsite so Paul and I had to get up to allow them to get some food before pushing. We cooked lots of food, trying to delay putting on wet, muddy and extremely cold caving stuff. We eventually left the cave still not having of had enough sleep. The journey out was slow and tiring but we was on the surface for the midday sun ' which is always good. All that was left now was the walk back to the Wiesberghaus. The next couple of days instead of resting consisted of some good hard climbing and walking up on the glacier, which was excellent fun, and we had great weather for it as well. Chris and Pete.W did not return when expected so the following day (Saturday) I went over to G5 to see if I could find them, luckily they were just on there way out when I arrived. After following the 'Birth Canal' for a little bit further than we had pushed it they decided that was not the way on, as it was rapidly closing down, so they de-rigged everything back to 'High Flyers' so as our efforts could be concentrated on pushing the old phreatics. 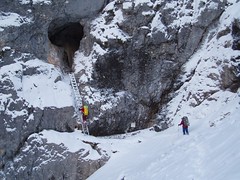 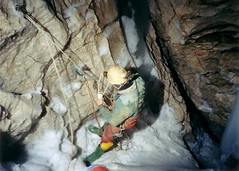 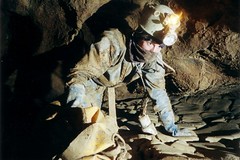 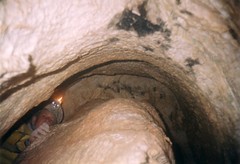